There have been those precise moments in the world of scientific discoveries that have broken all notions and re-drafted the way we look at our universe. Not only are these discoveries humbling but also a testament to the fact that even after a millennium, we are yet to unearth so much about the earth and beyond. Some of them are common knowledge enough to have been incorporated in the school curriculum. Some are complex enough to have only found an honorary mention in school textbooks and are privy to research scholars alone. Some have revolutionized how we look at the origin of man and his existence, some have simplified mathematics, some have explained the most common mysteries mother nature hides under our nose. Here are some of the most ground-shattering discoveries that reshaped our Millennium:

Theorized with the intention of having an impact on the field of Economics, John von Neumann and Oskar Morgenstern revolutionized inadvertently a plethora of other fields such as evolutionary biology and sporting sciences and analytics. The subject was further contributed to by Nobel Prize winner John Nash. John Nash’s life has been documented in his book “A Beautiful Mind” which was later turned into a movie. As much as fun as the name sounds, game theory is a crucial part of optimization in engineering and is implemented in simplifying complex algorithm using engineering mathematical functions. Make no mistake, it changed the game for several fields with its complex solutions.

‘Combustion’ is perhaps the first menacing sounding jargon that the average elementary science student gets to throw around, after ‘photosynthesis’. The discovery of the phenomenon known as combustion, in the 1770s paved the way for modern chemistry. Antoine Lavoisier theorized the role oxygen plays when a substance burns and thereby debunked the previous principles that misinterpreted the role of air as a medium to a substance that burns. This also eventually produced this thing called the internal combustion engine, without which there would be no cars.

Information Theory was established by Claude Shannon in the late 1940s and was a game changer in terms of information technology. There was no precursor to Information Theory, which means it is the first of its kind to lay down the ground rules that helped us study the coding of information, the mathematical side to it, how information is exchanged with the help of symbols and impulses, etc. This not only made telecommunication easy but also helped us make leaps and bounds in terms of progressing computer circuitry as it provided a better understanding of how fast information can travel.

The aforementioned is the study of the postulate that the Earth comprised of a singular Pangaea, a super-continent which consisted of all the present continents in unison. Then the continental drift occurred and the world geography as we know it today, was formed. The concept of the continental drift was ideated by Alfred Wegener as early as 1912. However, the idea of the tectonic plates and the roles they played was comprehensively defined by Canadian Geophysicist J. Tuzo Wilson, and his contemporaries. Without the tectonic plate movement theory, we would be out on a limb about where our landscapes originated from.

The role played by statistics in mechanics and by extension in thermodynamics as a whole, was prominently established by Clerk Maxwell, Gibbs, Boltzmann and their contemporaries. They explained the functions of heat in thermodynamic equations as statistical elements, which made it easier to interpret the results. Probabilistic mathematics found a stronger foothold in physical sciences and even gave birth to an offshoot of this subject, known as Statistical Physics. Statistical mechanics finds modern day applications as well, for instance in game theory, and real life scenarios such as algorithms for traffic signals.

This is probably the groundwork on which most of modern physics developed into the gargantuan user manual to the universe and how it works. Einstein theorized the special theory of relativity in two parts; one, that the laws of physics are applicable on all bodies that are not in acceleration; and two, that the speed of light in vacuum is the same for all observers, regardless of the motion of the source of the light. These two fundamentals laid the foundations for furthering studies relating space and time, matter and energy, eventually led to the invention of atomic bombs.

The general theory of relativity helps us generalize the theory of special relativity and the Newton’s law of universal gravitation. In layman’s terms, it helps us understand gravity as a geometric function of space and time. The Einstein field equations help us better understand the energy and momentum possessed by matter or by radiation, related to the curvature of space and time. In the broader aspect, it helps us understand how the universe is an ever-expanding dimension, and also the nature of existence of its polar opposite, the black hole.

Heliocentrism was the thorn on the side of flat-Earth believers, who also perpetrated the belief that the Earth is in the center and everything else in the system revolved around it. Copernicus debunked the myth of “geo-centrism” by stating that the in the astronomical schemes, the Earth gravitates around the sun as the central star of the system. This theory was later on contributed to by Johannes Kepler and Galileo Galilei, with observations about other celestial bodies accompanying the Earth in gravitating around the Sun. 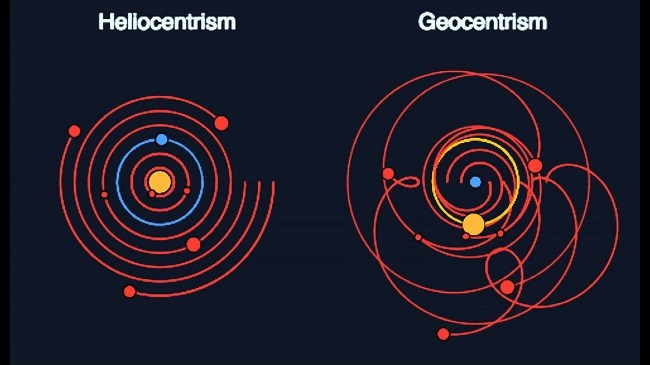 All living beings have phenotypic traits, i.e. measurable traits l
ike hair color, or eye color. The underlying gene which comprise the genotype, decide the color, but they have no measurable quality hence are not phenotypes. The heritability of a population is the variation in any given phenotypic trait of that population. That is the chances of survivability of a population from the aspect of this trait depends upon the amount of variation in that measurable trait of the population. This helps us derive from statistics whether a dominant gene will subdue a weak gene to work in favor of the species or not. Darwin theorized all of this to lay waste to the work of myth that the ecosystem is whatever that had been able to stow itself away on Noah’s Ark.

Quantum Theory chose to disrobe the image of the laws of nature as we know it. The ball started rolling with Max Planck proposing at the beginning of the 1990s that the radiation from a glowing body subjected to increasing temperature, changes in consistency from the red spectrum to the blue and that this phenomenon can be described by assuming that the energy can be broken down into individual units called quanta. This Nobel prize-winning thesis got the stalwarts thinking that the fundamentals of Physics as we know it should change overnight if seen through the quantum aspect. Einstein, de Broglie and Heisenberg all developed upon this Quantum Theory and spawned offshoot subjects like quantum mechanics and chemistry which is what our present day noble minds like Hawkings is studying and expanding on paper.