Isabelle Staub is a renowned illustrated artist whose Instagram feed is full of some of the best works you will see from a painter. “I’ve always loved Disney since I was a child, so I decided to paint the princesses in my own art style for fun,” said Staub. She works on one painting for upto 12 hours and whole magic is performed on Corel Painter.

Here are some of her best illustrations of Disney Princesses for your pleasure.

Pocahontas or Rebecca Wolfe was the prime character in the Pocahontas movie in 1995. She was based on a real Native American woman. She had helped with the colonization of the Jamestown of Virginia. She was born in 1596 and is said to have saved the life of Englishman John Smith in 1607. She married John Rolfe in 1614 and had a son a year later.

The painter here re-imagines her with sharp features and a darker skin tone. She also has a more prominent nose and lips. 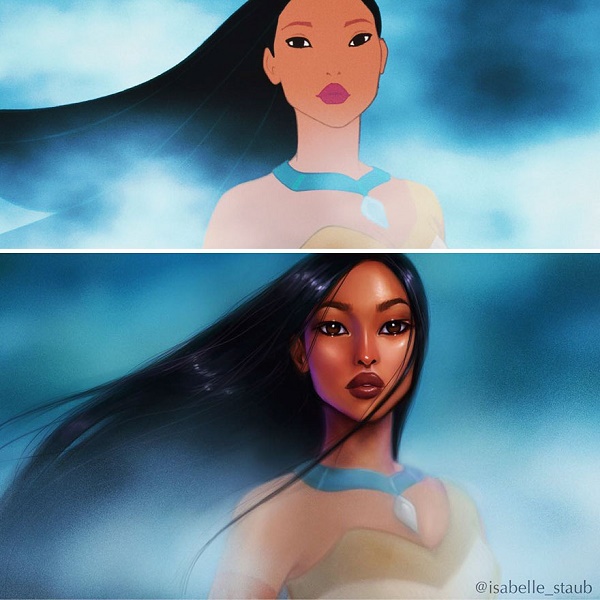 Ariel from the Little Mermaid is the main character from Disney’s 28th animation movie made in 1989. The painter here gives her more human like eyes, instead of the cartoonist baby like big eyes. The orange hair shines more in Isabelle’s reconstruction of the original painting.

3 Belle, Beauty and the Beast

Belle is the main character of the 1991 Disney movie Beauty and the Beast. This was the first animated movie ever to be nominated for a best picture Academy Award. Though the painter keeps the basic tones and features intact, she just gives the modern version of Belle some high cheeks, some beautiful eyes and gorgeous hair.

Aurora is the central character in Disney’s 16th animated movie Sleeping Beauty (1959). She was based on Charles Perrault’s ‘Sleeping Beauty’ fairy tale. Her physique was inspired by Audrey Hepburn and is considered one of the most beautiful Disney princesses. The painter here illustrates her in the innocent beauty a 16 year old princess must have had.

Disney’s Aladdin came out in 1992 and everyone was in awe of how Jasmine the princess actually looked. She had a pet tiger and was the princess of Agrabah. The painter now paints Jasmine as sultry as possible. Jasmine was first drawn to look both beautiful and seductive and this illustration artist beautifully gives her a much needed renovation.